The Regions 4Food project was initiated on the basis of a thematic smart specialization platform of the European Commission, the Andalusian-led Traceability & Big Data platform. The lead partner of the platform is the same as the lead partner of Regions 4Food project, and South Transdanubian Regional Innovation Agency (STRIA) also contributes to the operation of the platform with its reports on the agricultural digitization trends of its own region. The annual conference of the Traceability & Big Data platform took place on November 28, 2022 in Malaga, with the participation of staff and stakeholder of STRIA.

The closing conference of Phase 2 of the Regions 4Food PGI05289 project took place the next day, November 29, 2022. At the event, STRIA reported on the situation of the greening of agriculture and the simultaneous digitalization of it in South Transdanubia region, as well as on the experience of testing the agricultural higher education master’s program in Kaposvári (at MATE Kaposvár Campus) taken over from the University of Seville. The event was attended by both STRIA colleagues and stakeholders (Managing Authority of the Economic Development and Innovation Operational Programme Plus, Fino Food Ltd., Centre for Agricultural Research of the Hungarian Academy of Sciences).

Finally, on November 30, 2022, the Steering Committee meeting was held exclusively with the participation of the partners of the Regions 4Food project. During the event the partnership reviewed the tasks due until the closure of the project, May 31, 2023. Only STRIA staff took part in the event, but not its stakeholders.

The 4th Activity of the pilot action of the Regions 4Food project reviewes the possibilities of influencing the targeted policy, in our case the Digital Agricultural Strategy (DAS) of Hungary. The discussion, which took place in Kaposvár, at the Hungarian University of Agriculture and Life Sciences (MATE) Campus, on December 6, 2022, was also made available with online participation.

During the event, MATE lecturers presented the university results of digitization as a comprehensive educational organization practice, and highlighted their connection to the “Digital Agricultural Academy” of the National Chamber of Agrarian Economy. Event participants were informed that there is already a Digital Food Strategy (DÉS) that specifically responds to the needs of the food industry, thereby orienting a new segment of the agrifood value chain as a national-level strategic document. 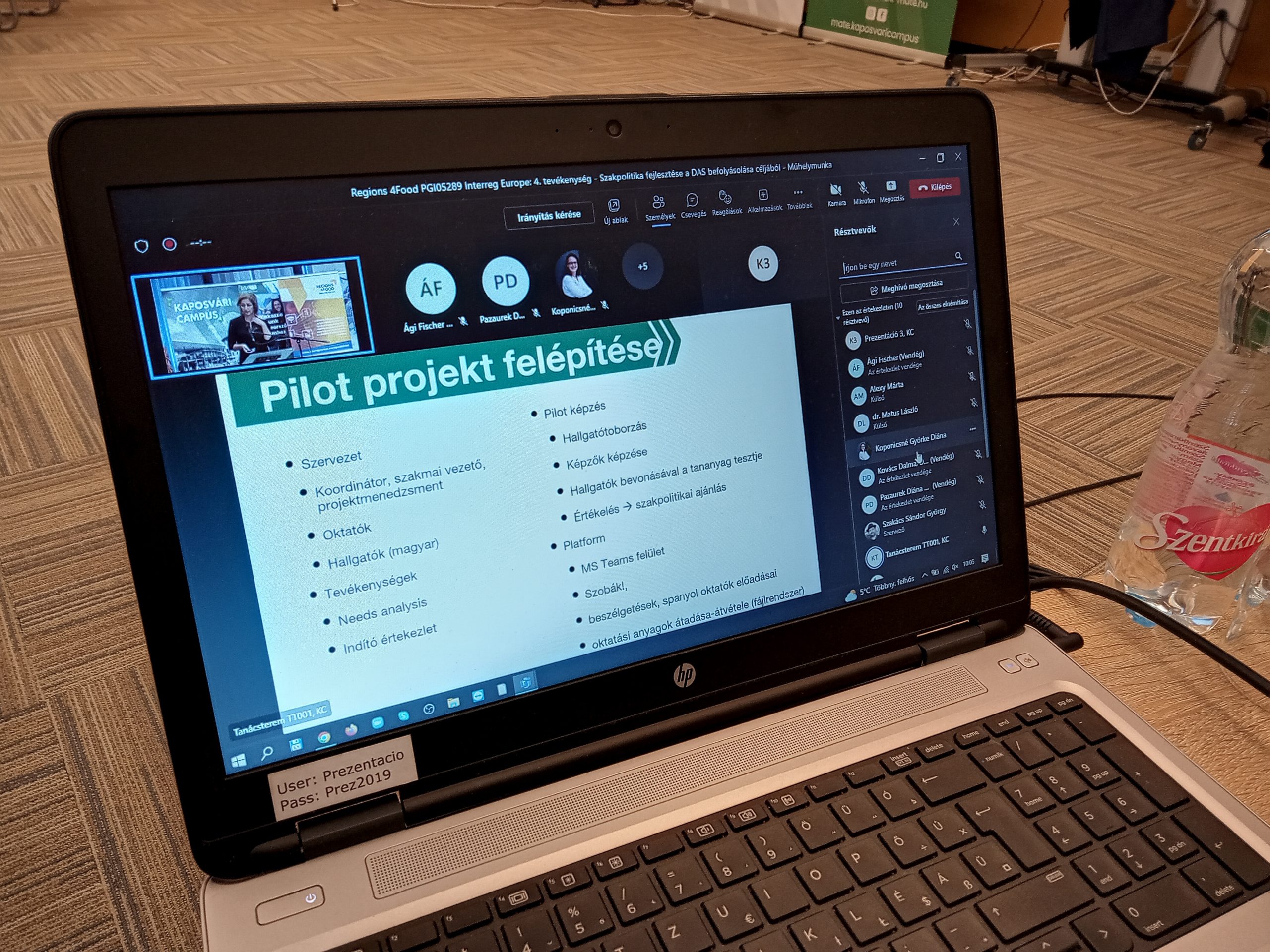 In connection with the 3rd Activity of the pilot action, i.e. the lessons learnt from the pilot training, it was said that the shared content served the development of the knowledge and competences of both university students and lecturers as well. It is worth noting that MATE’s agricultural innovation and digitization corporate partners also benefit from the inclusion of this knowledge material in agricultural higher education. 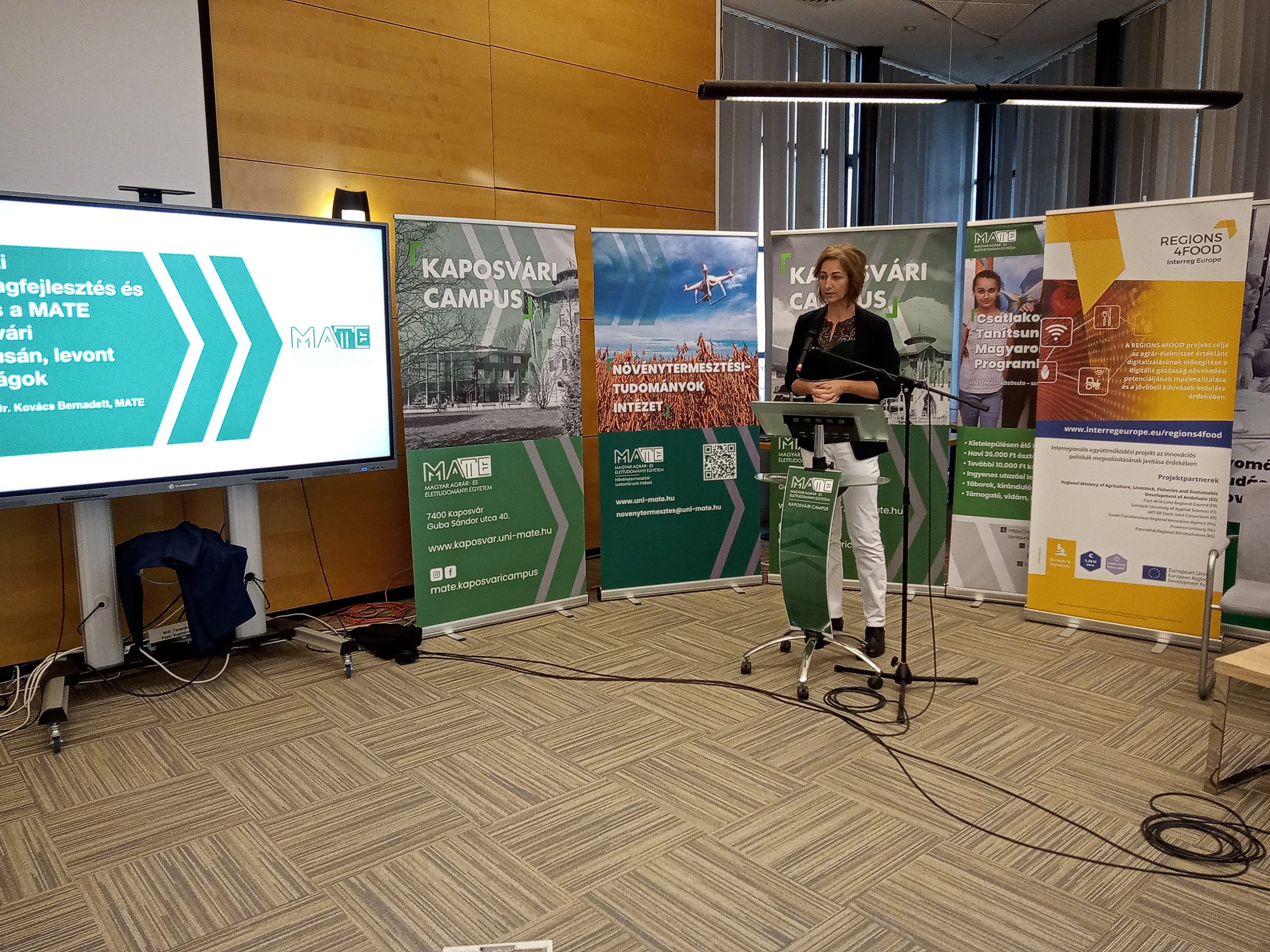 The focus of the event was basically the foundation of the package of proposals for DAS, in three aspects.

Regarding the economic relevance, university-company collaborations need to be re-evaluated. This relational dimension must also be taken into account by the support programs of the European Union (e.g. GINOP Plus, for example). Demonstration plants and educational farms are of great importance from the point of view of initiating joint tenders and effective – in many cases project-based – collaborations. The latter tools are also of great benefit and practical insight for university students and lecturers.

As for the policy connection, it is recommended to emphasize the educational dimension. The digital world is changing rapidly, whether we look at the device system or the body of knowledge. Given that the DAS itself has become outdated since its introduction in 2019, the strategy needs to be continuously reviewed in the future.