The paper offers overviews of

The paper makes recommendations on

Currently there are 8,500 public transport buses in Hungary of which 2,800 belong to urban units dominant public transport organisation (in short: PTO). The state-owned Volánbusz has around 6,400 buses of which 1,000 ones serve in towns. Independent local bus companies operate in Budapest and in 7 other towns, 2 of which are served by domestic private enterprise called ITK. The market share in Hungary of multinational PTO companies – i.e. Arriva, Blaguss – in provincial omnibus transport is not significant. Urban buses are diesel-powered, about 42% of those are articulated, their average age is approximately equal to14 years.

When the eBussed project started, only 20 midi + 1 solo e-bus were in passenger service. E-bus deployment through the Green Bus Programme (in short: GBP) started on 31 August 2021. That time 40 e-buses were operating in 3 urban fleets, and a further 4 vehicles in 3 towns: a total of 44 electric buses in 6 urban locations. The unicum was that the capital Budapest has no solo / articulated electric buses in passenger service.

Thus – despite 6 purchases in 5 years – there is still a substantial room for improvement in urban street bound public electric mobility – i.e. deploying e-buses – in Hungary.

Poland is prominent in both e-bus & H2-bus production and e-bus deployment is over 700 units. In Bulgaria and Romania also there are hundreds of e-buses placed already or soon to be put in passenger service, predominantly funded by EU Environment Operational Programme. Austria has 184 purely electric buses in operation, but this figure includes trolleys as well. Hungary, within the framework of the EU Transport Operational Programme so far has acquired 18 solo + 4 midi + 0 articulated, altogether 22 electric buses operating in 3 cities.

In Poland each municipality is running it independently with the support of a guide-book. In Bulgaria and Romania it is a central organisation / Ministry that takes care of tendering and distributes the “spoils” among the bidding municipalities.

Hungary has a hybrid system dominated by national bus&train company MÁV-Volánbusz It seems that centralisation does not offer guaranteed comprehensive up-to-date knowledge (false dayrun requirements, battery performance/warranty, d-bus/e-bus replacement info). In the absence of valid information and guidance, municipalities publish and conduct their e-bus procurement on the basis of their subjective knowledge, often fraught with errors.

State support for purchasing green e-buses should be also compared:

In Hungary, within the call for proposals of the 2021/2022 round the GBP has allocated a sum of 4,200 million HUF / that is around 12 million EUR for e-buses and charging, but the strong demand increased it to 18,400 million HUF / in EUR it is around 51 million. The shortcoming of GBP is the lack of content in its demo project B / and a lack of innovation in financing.

South-Transdanubia, a region of three counties offers a specific potential:

The 3 cities of the region are “green trail blazers”: Pécs and Paks elaborated strategies on e-mobility pre 2016, and Kaposvár developed ambitious green city vision, with energy self-sufficiency as ultimate aim. The cities all show biodiversity of the e-bus ecosystem – enabling / entitling the region to become an e-bus demo zone & competence centre. Details of this will appear in a separate post.

First domestic serial product evopro’s innovative composite-bodied 8m midibus, launched prematurely in 2013 failed in 2016. It also set back the domestic adoption of public e-mobility. Currently there is one e-bus considered substantially as Hungarian make: the once respected Ikarus started to produce a 314 kWh solo model in Chinese / CRRC partnership. Another one is the Credobus that has started to develop a solo model in Czech /SOR cooperation.

ITE has set up its e-bus development unit, while the global leader BYD operates its European e-bus assembly centre      in Komárom, Central Transdanubia. Despite Műszertechnika’s 120 kW single charger proto, there is no significant national output in 1/ BEV component, 2 /charging equipment, 3/ battery unit, 4/ ITS, and 5/ bus AD development. Besides, no concerted national e-mobility cluster has been envisioned / established so far, so by the GBP the No1 government objective that is having more than 60% domestic value in procured e-buses seems unattainable.

The development and mass production of competitive native e-bus &/ charger systems is a need, but GBP did not outline a vision identifying aims for domestic RDI sector. Without this, no significant, lasting national value creation can be expected in

To tackle these challenges, growing quickly and creating value independent of giga investments is favourable for Hungary. The software development aspect is still in infancy: no homemade IT package supports e-fleet operation, charging, battery, energy-management, preventive maintenance, driver coaching, scheduling, etc. On the other hand intelligent e-mobility systems/ITS are unavoidable for efficient operation of e-bus fleets. It is in common interest to support their purchase – thus the development of those – by the GBP.

A ten-year programme must involve H2 fuel cell drive technology, especially that it offers a wide range of “niche R&D topics” and has international cooperation potential.

Comfort and safety are of primer importance to regain passengers, so innovation in thermal comfort efficiency or in fire prevention are narrow, however important fields.

Battery cell production is most significant at European level, but fully in foreign ownership so R&D in energy storage systems and battery management systems (in short: BMS) offers a significant domestic potential.

The electrification of transport is inevitable and will bring about fundamental changes. As the e-mobility world is changing rapidly, ‘shelf life’ of information limited both in quantity and depth is extremely short. Hence even the best-intentioned decisions – based on outdated knowledge – turn out to be wrong, causing long-term losses – if not serious damages.

At the same time, since September 2019 in the public scene in Hungary there is practically no public debate on public road e-mobility: a lack of conferences, discussion round tables, exhibitions, periodicals. The only public forum being an internet platform called ‘Electric buses’. In view to the first line – inevitable fundamental changes – this situation must be changed!

Government subsidies for non-zero emission city bus purchase came to an end in 2021. However, the Green Bus Programme (2019) and its background materials were not subject to public consultation, the three EU-funded “e-fleet cities” in South-Transdanubia (Pécs, Paks, Kaposvár) were not involved, no up-to-date situation survey and/or consensual vision was published. Legislation / terms of reference has been often amended: significantly improved to enable facing the changing reality.

In 2019 the GBP 1.0 launch aimed to replace more than 40% of urban buses with zero emission ones by 2029. The program in the 1st round funded A (awareness raising, e-bus demos) & B (e-bus purchases and related infrastructure development) related type of pilot projects with 1,600 million HUF / that is around 4,4 million EUR, and the funding period ended on 31.12.2020.

In 2022 the domestic ‘seed fund’ has been supplemented by 2 EU facilities (the Resilience and Recovery Fund, plus the Integrated Transport Development Operational Programme) into a great plan. 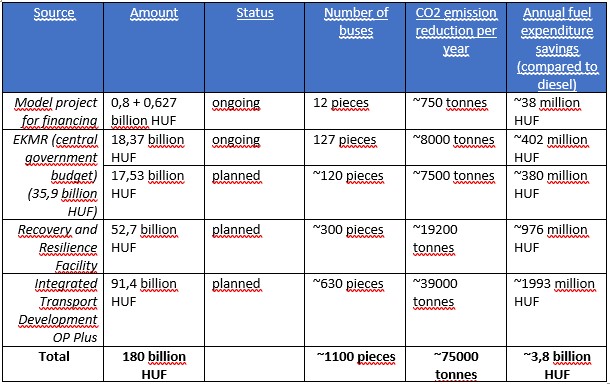 The current government targets are the most ambitious. Its components are as follows:

The 1st GBP call for proposals underwent several, sometimes substantial changes. The final terms of refence of the 1st competitive bid were: up to 80% subsidy for replacing the most polluting e-buses based on unit price 178 million HUF / around 0.44-0.49 million EUR, and up to 60% of the charging infrastructure investment.

Beneficiaries are as follows:

Thanks to Green Bus Programme 1st call for proposals, in 2022 135 electric solo buses could join the existing bus park of 46 + 4 privately owned ones =50 units, thus making up the 185 e-buses. The green fleet will be joined by 4 trolley buses with autonomy, too.

The No 2 government target that is “Achieving the lead position in public e-mobility in East-Central Europe by 2025” is unlikely to be met on Bus Adapter Unit (BAU) base. We also have to add to the conditions the impact of the present economic situation (the Russian-Ukrainian war, plus the impacts of the sanctions issued by the European Union).

The most ambitious new round of competitive bids has been opened on 5 May, 2022. The available subsidy totals to more than 51,000 million HUF / circa 126-133 million EUR, targeting to purchase some 300-350 solo e-buses and charging infrastructure, aiming at:

The following conditions were applied: proposals could be received form 47 eligible municipalities, aiming at a purchase of solo battery electric vehicle (BEV) buses and trolleys with autonomy and their charging infrastructure to be supported are similarly to 1st call for proposals. However, full exploitation of budget seems to be unlikely in the present economic climate. The deadlines are: applications to be submitted until 30 September 2022, whilst completing the GBP 2nd call for proposals projects are due to be closed until June 2025.

The Green Bus Demonstration Pilot Projects, A and B

The objectives were to prepare and justify the mass implementation of e-buses and their infrastructure.

The most convincing pro-e-bus argument is provided in 5 days by Miskolc (a city that has not benefitted from subsidised 28 day “tests”): a BYD demobus with more than 350 kWh battery capacity, 20% reserve at the end of service and 4 hours depot charging comfortably achieved 200-250 kms/day in all types of schedule and meeting different demands.

The average performance data of the first 3 tests was 164 kms/day, the daily maximums were 195-229 kms/day: these figures are not convincing at all, even… In case we take a snapshot at the end of the eBussed project (Phase 1, July 2022): 28 tests in 23 towns were organised, all these tests lasted 84 weeks, 3 articulated, 7 solo, 1midi e-bus, plus 1 H-bus from 8 Original Equipment Manufacturers (OEMs).

In terms of GBP Type B / Financing demo project, it could be stated that no model was developed for municipalities to apply further in terms of e-bus deployment, although financing development projects nowadays is most challenging, thus innovative financial engineering is much in need. Subsidy was awarded to Debrecen in a value of 800 million HUF / circa 2.1 million EUR to purchase 12 e-buses and 0 chargers. The unknown selection process applied by GBP with unknown scope means no help for other municipalities participating in the call. The No 3 government aim to reduce CO2 emission and air pollution along with fuel prices is on track.

The GBP Demo Project A and its extension

Having that written, articulated e-buses are a hot topic: the biggest challenge in replacing diesel propulsion! Tests of 3 vehicles have been launched to gain PTO experiences and passenger opinions. Serious worries have been raised: tests took place in the same season, on a similar flat terrain, with no quick charge equipment made available in depos. Also, some models were “elderly” overused, representing not cutting edge technology, therefore several faults occurred. In the meanwhile all major European OEMs are developing / producing articulated e-buses, and comparative test of 6 European articulated e-bus models became public.

Tests lacking systematic monitoring and analysis of the newest models can only bring misleading and disappointing results: at the end of the day counter arguments, instead of pro arguments can be derived. It is hoped that with the implementation of GBP 2nd call for proposals and with a review of articulated tests Hungary we will get closer to achieving the ambitious green public road mobility objectives set. 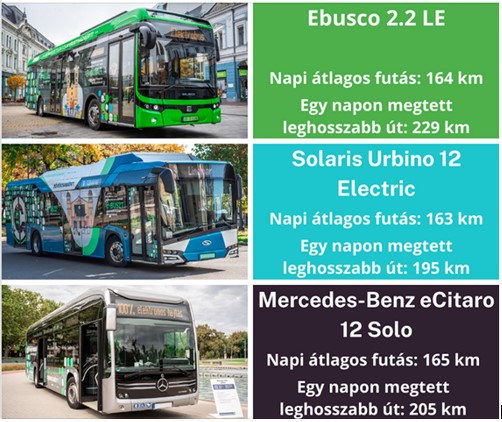 Data lines from top to bottom on each illustration:

The above overview demonstrates the state of the test project as of March 2022 (source HUMDA). It started on 2nd September 2020, and the following e-bus models had been tested: 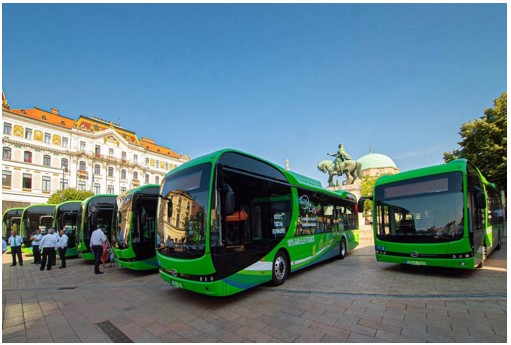 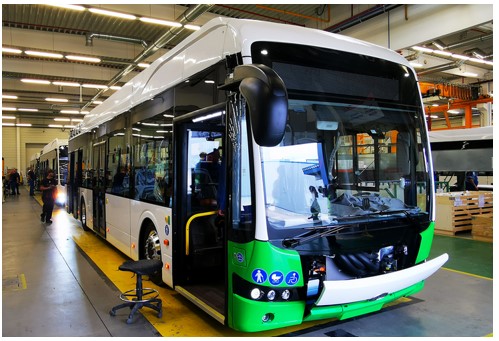 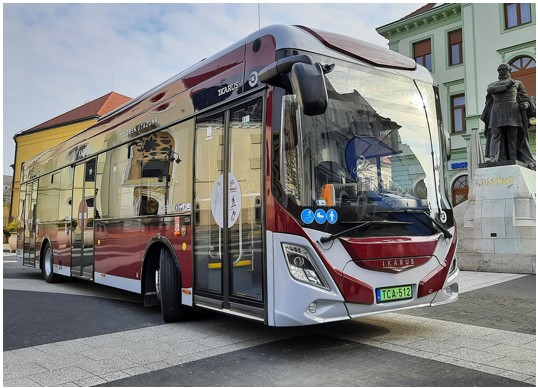 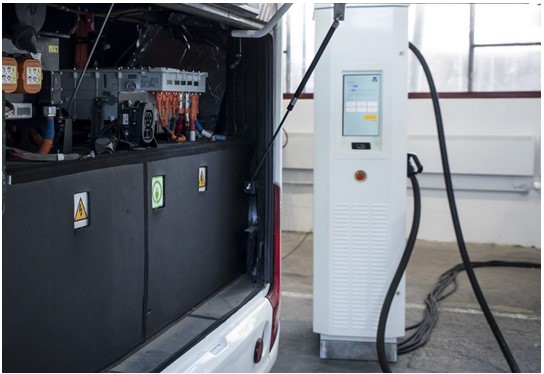 Műszertechnika EB120S charger prototype and back of an Ikarus City Pioneer 12EL.