On July 20, 2022, a stakeholder discussion of the E-MOB Interreg Europe project (https://projects2014-2020.interregeurope.eu/e-mob/) took place online under the title “Electromobility without borders”. The focus of the meeting was a round table discussion, which dealt with the low-emission public transport developments of Marosvásárhely, one of the defining settlements of the Central Region of Romania, including the development of the electric bus fleet.

In the introduction to the event, there was a brief presentation of E-MOB, which supports the comprehensive electromobility developments of European municipalities (electric municipal vehicle fleets (such as taxis, commercial vehicles), electric bicycles, related electromobility services, etc.), and the eBussed project (https://projects2014-2020.interregeurope.eu/ebussed/), which promote the establishment of municipal electric bus fleets. 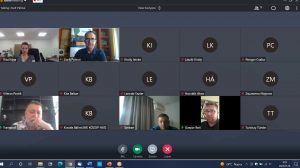 During the round table, Vilmos Portik highlighted that since 2020, the life of the city has been organized along a new public transport model. Before 2020, public transport was provided by a business association that merged with private enterprises. At that time, they were unable to purchase new equipment, so the bus fleet became obsolete, and no improvements were made. He added to all this that public transport in Marosvásárhely was not determined by professional decisions. Since 2020, however, the European Union tender opportunities themselves have favored hybrid and electric solutions, along the lines of goals such as low emissions or increased digitalization.

Serban Constantin added that the first EU funds for the 2014-2020 program period became available to the city in 2016. Marosvásárhely’s sustainable mobility plan (SUMP) has been prepared, based on which tenders have been drawn up with the aim of reducing CO2 emissions from road traffic. They currently have 8 projects under implementation, approximately EUR 80 million in various construction phases per project.

These projects focus on electric and hybrid mobility, two of them deal with new buses. There are 47 electric buses in delivery at Marosvásárhely, another 38 are still under production (all of them solo and midi buses). It is very favorable that the contribution of the municipality is 2%, a symbolic amount. The affected projects include site modernization, but the creation of e-bus lanes also receives support. He also points out that green lanes for green (environmentally friendly) buses have been implemented in 40 Marosvásárhely traffic junctions. Needless to say, they have an e-ticketing project as well as a dispatcher training project. Projects also finance the renovation of 137 bus stops and two bus terminals. An important development is the creation of an alternative bicycle lane and the creation of electric bicycle management, the latter mainly to serve university students studying in Marosvásárhely. However, the completion of the mentioned developments is close, as all the above-mentioned projects must be completed by December 2023.

In his opinion, the extension of public transport to settlements outside the city is about a year long process, financed by the Recovery and Resilience Facility (RRF). Here, they are planning to purchase 18 low-emission buses from tender sources. He considers it very important to change the mentality between 2021-2027, which requires the formation of school attitudes. School buses were also introduced in 2021 so that parents do not bring their children by car.

With regard to other low-emission modes, he adds that in Marosvásárhely, based on the municipal regulations, the provision of a scooter service has been resolved, which is provided by the company Lime. Avoiding accidents was the main consideration for this mode of transport. 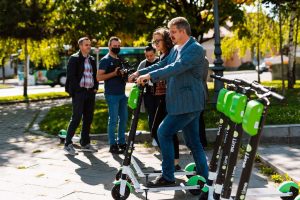 In his comment, Béla Tatar highlighted that the Marosvásárhelyi Közlekedesi Vállalat currently has 96 buses. A significant part of these are over 10 years old, which are gradually being phased out, and they will be replaced by new electric and hybrid buses that will run on city lines. In the spirit of this, the previous city administration initiated the procurement of 41 diesel buses from its own resources, which arrived in December 2021, and on top of these, another 21 are due to be delivered this year. In addition to the local public transport company, a partnership association has also been newly established, which will purchase additional buses, but they will no longer be owned by the local government. He points out that there are many interest groups in the city who are opposed to greening. However, with the end of the previous European Union program cycle (December 31, 2023), it will be easier to implement the new, environmentally friendly public transport. Until then, however, attitude formation is important: with local government decrees, or public consultations, such as the one that took place with taxi drivers. Although Romanian national laws help with this, the local environment and the courts do not speak the same language.

The Marosvásárhelyi Közlekedesi Vállalat itself has been providing services since 1995, initially 75% owned by the local government and 25% owned by Romanian investors. Since 2002, the municipality has gradually bought out the investors, a process that ended in 2004-2005. The fleet of 96 buses has a mixed composition, including 20 BMC, 20 IVECO, as well as Mercedes and other additional buses.

The peculiarity of the settlement is that the town is divided by hills, and we are talking about a medieval but former communist town, from which four-lane main roads lead out, while the other public roads are typically two-lane. Almost every family in Marosvásárhely has two cars (this is also significant at the level of Romania). There are large employers in the city, such as the hospital with 4,000 employees and the university with 7,000 students, so it is worth focusing on these in public transport.

The fact that the newly introduced Solaris electric buses, with their daily capacity of 100-110 kilometers, are still far behind the diesel ones with a daily mileage of 200-300 kilometers is also related to the characteristics of the settlement. Tenders for electric buses had to be submitted within the framework of a government program, and the city’s managers and professionals could not and still cannot influence the parameters of the national procurement. There was only one refreshing exception to this: the technical description of the hybrid buses was provided by specialists from Marosvásárhely, and this is considered progress. 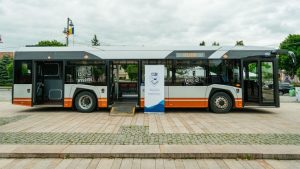 The running distance of Marosvásárhely buses is 320-330 thousand kilometers per month. If the supply of the urban fringe zone becomes more prominent, it means a 30% increase, which would require 130 buses.

With the introduction of electric buses, there will be no changes compared to the city’s current network, as the criteria included in the procurement financing tender are based on maintaining the current network. Maybe 1-2 new lines will be built in the future, but this depends on the development of the city.

The charging system for electric buses is based on 32 on-site, slow chargers (which charge a bus in 3-4 hours), 4 pantographs at the line ends, and 2 fast-charging pantographs. This system was built based on the manufacturer’s data, as there were no Solaris demo buses in Marosvásárhely. However, there were buses of the types that were not acquired later (electric MAN, Ikarus, Mercedes buses). Therefore, there are no good experiences with Solaris, in addition, charging times must be included, and drivers must learn how to drive the new vehicles.

As for the training provided to the mechanics, it takes place through the supplier in Marosvásárhely. There is no teaching material in the Romanian education system regarding the repair of hybrid electric vehicles, only for driving trams. The country is also characterized by a lack of bus mechanics, as vocational schools in Romania were closed earlier. They have now been restarted, but the shortage is still considerable.

There have been no electric bus fires in Romania, the planning and construction of vehicle parks is carried out by the competent office in all cases. However, the site in Marosvásárhely is currently partially unsuitable for fulfilling the fire protection rules, especially for maintaining the 6-meter distance between buses.

Finally, the participants of the round table reported on their Marosvásárhely school bus project. 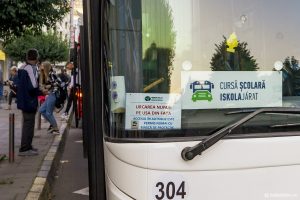 The service was based on a needs survey among parents, and those who were interested were primarily parents living in ourskirts of the city or in conurbation settlements. However, when the service was launched, almost everyone was interested. In the post-coronavirus period, the number of students traveling daily was around 1,500.

When planning the routes, it was taken into account that most schools could be reached and that the school bus starting from the edge of the city or crossing the city. The service was launched on 4 existing routes. After the start, there was a great demand for additional lines. In the future, 15-20 buses would be needed, mainly articulated ones, as first or second buses. The buses need a driver to the school in the morning and back to the place of residence in the afternoon.

School buses can be diesel, electric or hybrid vehicles, the point is not being the vehicles, but the smooth operation of the service.

This type of service cannot be included in the public service, as the current line network does not allow it. 4-5 buses per school would be needed for the proper operation of the school bus service. Therefore, the solution was to double the number of buses on the already affected lines.

At the end of the stakeholder consultation, the employees of Paksi Közlekedési Kft. offered Marosvásárhelyi Közlekedési Vállalat the exchange of experience related to Solaris buses.