Between 17 and 20 May 2022, the management of Paks Transport Ltd. gave me the opportunity to personally participate in the so-called final seminar of the European Union’s Interreg Europe eBussed project. This meeting, which promotes the exchange of experience and presents the work developed by the various workshops, was the first time since 2020 that it was possible to organise a personal participation, because the spread of the Covid-19 pandemic and the current state of vaccination and protection at European level allowed it. The conference was hosted by the city of Hamburg.

In the morning, the project partners and the project’s executive management met, to which I was not invited as a stakeholder. From the welcome speech we learned that Hamburg is a large city with a population of 1.9M, the population is forecast to reach 2M by 2030. In 2008, the predominant mode of transport was the private car, chosen by 39% of commuters, while public transport was preferred by only 19%. By 2017, the gap had narrowed to 36% and 22% respectively, or 14%, while the share of cyclists had increased slightly. By 2030, the city aims to increase the share of public transport to 30%, the share of cyclists to 25% and the share of car users to 20%, in order to reduce local CO2 emissions from transport by 55%. It is estimated that this 20% will be the 20% who would never be willing to give up their cars under any circumstances. Gordon also spoke of the opposition to banning cars from the city centre. There was a 4 month trial period when this measure was introduced. It was greeted with huge controversy at the beginning, but by the end of the 4 months the population had grown to like the tranquillity of the city centre. Afterwards, Stephanie Keßler, representative of the Hamburg partner, and Aleksi Heinonen, representative of the Finnish lead partner, gave a short overview of the whole project. It was said that the several years of professional work will end with this conference (hence the name of the meeting as FInal Seminar), but that the project still has a 1-year follow-up phase, when the partners can share their experiences during the implementation phase. This period will be concluded by a further meeting, which is expected to take place in Livorno. After the overview, the most instructive presentation of the whole conference for me followed. Markus Wiedemann, Technical Manager of SSB Stuttgart (local public transport operator), reported on the disaster following the fire of an electric bus, the damage recovery and the restoration and reconstruction of the bus garage. After a short coffee break, the meeting continued with a presentation of the workshops. Colleagues from Germany, Malta and Hungary presented their activities, sharing their experience in planning and implementing the switch to electric buses and operating the infrastructure. 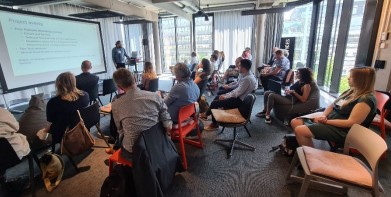 After the presentations on Wednesday, we had a dinner together in a restaurant, where we also discussed operational experiences at the table of a Finnish transport company CEO. As a remarkable idea, I noted the way in which their e-ticketing system works. The QR code, which symbolises the ticket, can be printed on any device, can be used for an unlimited period of time and only once, and is checked and invalidated by a validator on boarding. Unlike in Hungary, there is no zero tolerance in that area. The company has a contract with many of the city’s nightclubs, which automatically give their guests a QR code with their drink when they exceed the alcohol consumption limit allowed in the guide. The ticketing clearing house keeps a log of which QR codes have been generated by which retailer and which QR codes have been used, so that the restaurant only receives a share of the tickets that have actually been used by the guests.

On Thursday, the organisers took us on factory visits. The attraction of the trip was an electric bus that transported us. For me, the experience was rather amusing as it was nothing new. Noticing the rear doors unable to close when stationary, and the air conditioning working sub-optimally in the summer heat, which is unusual in Hamburg, I was reminded of a conversation I had the day before, during which a German colleague told me that as an early adopter, the company had bought a number of first-generation electric buses, which were now having to be scrapped because of technology and manufacturer teething problems, as well as unrealistically high running costs from repairs. In this respect, we are in an easier position. Even if we seem to have a lot of teething problems, those who have gone before us have already improved our situation a lot. 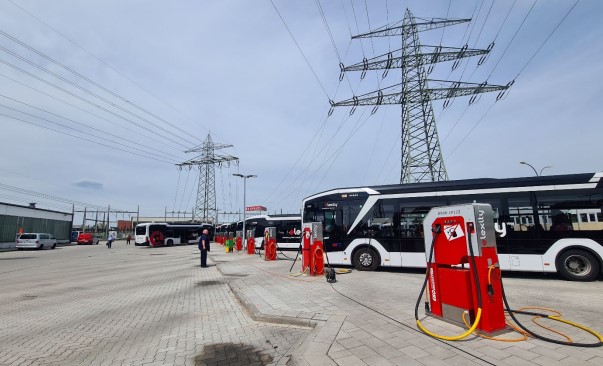 Our first stop was at the e-bus depot of the Hochbahn company, which is owned by the municipality of the city of Hamburg but operates on the free market principle. On arrival, we noticed the huge car park. As we later learned, the company operates with 6,000 employees and serves 1.2M passengers per day. In the bus garage we visited, about 170 buses rest every day, 90 of which are fully electric, and among them we saw Solaris vehicles of the same type as ours. Up to 7 buses can be parked side by side in the garage, with two (midi) or three (articulated) buses parked behind each other, but the side rows are not used for exit and fire safety reasons.
In the afternoon, we listened to the rest of the workshop reports from Italian, Dutch and Finnish colleagues. What I found fascinating in this was the difficulties the Italian team revealed in their own area. Here, both pantograph trolleys and end-to-end electric buses, and in fact site development, face almost insurmountable obstacles. In fact, in order to protect Italy’s historical heritage, the authorities will not grant any permits that would involve the demolition of pavements, alterations to the built environment or earthworks in general. However, if such work is carried out, it is almost inevitable that some archaeological remains will be uncovered, forcing the entire project to be halted. The choice of bus models is also a major challenge, as most municipalities have strict weight limits for vehicles wishing to enter the city centre. The e-bus is heavier than an internal combustion bus because of the battery, so it is difficult to find one that fits the standard. Even if there were one, many would have to be operated because of their smaller capacity due to their size. The evening was spent individually in the city centre

On the last day of the conference, we heard a presentation by our Dutch and German academic partners, who presented an interesting thought experiment on the attachment, convenience and habitual resistance that must be overcome if we are to shift society away from personal transport and towards public transport. They also presented a local research study, which was fruitful as a scientific model, where the dynamics of intermodality were investigated along a number of parameters, and thus created a significant market value by being able to advise the client. With this advice, it is hoped that efforts to promote public transport can be more effectively implemented. What is more, unnecessary investment or marketing costs can be avoided if we know what the local community is and is not willing to do. This service is readily available within the EU and beyond. After the formal end of the meeting, there was an optional factory visit to a company based on a demand-driven transport model. I saw a very interesting, truly modern solution to the challenges of a market that is evolving very rapidly through the widespread use of smart devices.

The article is highlighted from a report by Barnabás Weller of Paks Transport Ltd, a colleague who travelled with DDRIÜ.