Electric transport, renewable energy – smart network elements in the developments of the period 2021-2027

On May 11, 2022, the stakeholder and information event of the E-MOB Interreg Europe project (https://projects2014-2020.interregeurope.eu/e-mob/) entitled “Electric transport, renewable energy – smart network elements in the developments of the period 2021-2027” took place online. The aim of the event was to improve policies related to regional passenger transport systems in order to increase the share of electric mobility. Paksi Közlekedési Kft., as the Hungarian partner of the E-MOB project, wants to achieve all of this based on an international exchange of experience and by helping the work of the Integrated Transport Development Operational Program Management Authority (IKOP IH).

In the introduction to the event, there was a brief introduction of the E-MOB project, which supports the comprehensive electromobility developments of European municipalities (electric municipal vehicle stock (e.g. taxis, commercial vehicles), electric bicycles, related electromobility services, etc.). The presentation was given by Balázs Kiss, the external expert of Paksi Közlekedési Kft., who emphasized that the E-MOB was based on learning from each other (peer reviews) and supported the electromobility solution in many settlements in such a way that it was well built and fit also for the renewable energy solutions of the given city/region. 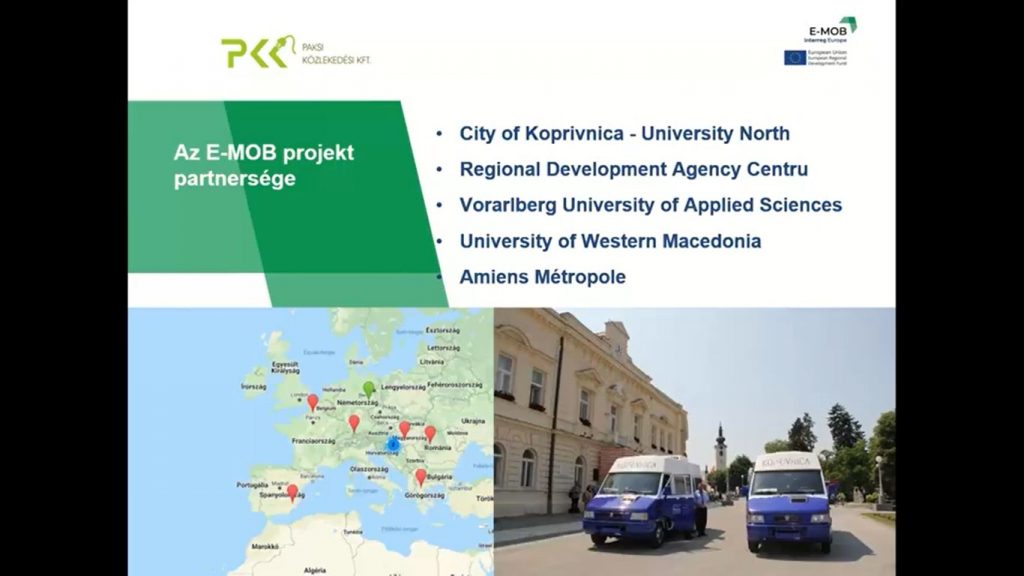 To illustrate what was said, we were able to talk about three Good Practices at the event. First of all, about the purchase of electric buses in Amiens, France, and related infrastructure development (establishment of a garage, chargers, new offices for management), where the vehicles have to stop several times a day for charging due to the low-capacity ebus batteries (depot or pantograph end-point charging). At the same time, several technical problems arose with the Spanish Irizar buses, based on the comments of both the operators and the traveling public (low operability, they react sensitively to weather changes). 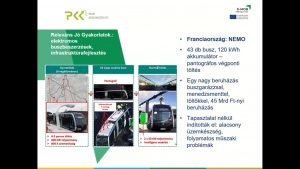 Larger municipal governments, such as Brașov, have started building electric bus fleets in several settlements in the Central Region of Romania. Romanian procurement was centralized, buses and trolleybuses were purchased separately at central government tenders, and individual regions could choose from these. In addition, in contrast to the Amiens example, bus garages and site improvements were the subject of separate procurements here. The implementation was therefore not driven by a complex approach. As a characteristic of Transylvania, it should also be pointed out that the architecture and spatial structure of historic downtowns pose special challenges for ebuses. 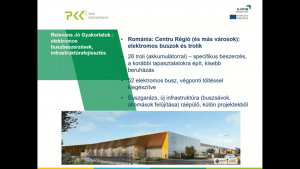 The third good practice comes from the Voralberg region of Austria. They already have more than 10 years of experience in operating electric chargers and rental electric cars, but they only started working with electric buses in 2018. Despite the powerful Austrian region, they waited and started a small-scale, limited sample project regarding ebuses, involving many actors (regional government, college, service license holder, etc.). Public procurement was also started on an experimental basis, taking into account the higher price compared to diesel-powered buses, as well as the savings resulting from electric operation. The essence of the Voralberg project is therefore mostly testing and the involvement of the relevant actors, including college students. A result already registered during the test period is that the buses take half as much electricity during peak times (rescheduling the charging for the valley periods), the reorganization of the flight routes has also started, and the performance of the various battery packs is also being tested. Another experience is that the acquisition of small bus packages, as here (i.e. 4 vehicles), does not really arouse the interest of manufacturers. 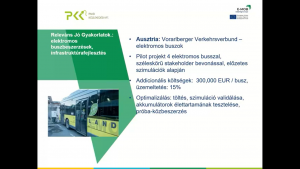 The stakeholder experience transfer targeted at the event was continued by assistant professor Dr. Petra Szakonyi, staff member of the Department of Transport Infrastructure and Water Resources of István Széchenyi University, E-MOB external expert. She emphasized that it is necessary to solve the complexity of electromobility projects and the inclusion of local/territorial renewable energy sources in the framework of the operational programs between 2021-2027 (IKOP Plusz, KEOP Plusz, TOP Plusz).

During the exchange of ideas, Dr. Zoltán Takács, the head of department of the IKOP Plusz IH of the Prime Minister’s Office, highlighted that no major changes are expected in the support schemes, but the financial framework is not yet known, although the level of co-financing in the case of buses will be very similar to that of the previous cycle. The renovation and modernization of bus stops will be a priority task in larger settlements. The reduction of urban emissions will play an important role in urban transport, and priority will be given to alternative drive, especially electric solutions. The 4 least developed Hungarian regions will primarily be the target area of ​​these funds. In addition, RRF and Green Bus Program funds will also be available for the development of low-emission transport. A big difference, however, is that in the case of IKOP Plusz, the allocation of funds must be based on a cost-benefit analysis, while this is not a condition in the case of the RRF and the Green Bus Program. He also suggests that we should learn not only from good but also from failed (bad) practices.

On behalf of HUMDA Zrt. (HUMDA – Hungarian Motorsport Development Agency), Gergely Bánlaki highlighted that the procurement of 300-350 electric buses from their HUF 50.2 billion budget will be supported with the probable exclusion of Budapest and its agglomeration area. Within the framework of the RRF, HUF 45 billion is aimed at electric buses, and the Green Bus Program also received considerable funds (several billions) for electric bus purchases.

Regarding the role of sustainable urban transport plans (SUMPs), it was said that their existence is not a direct condition for successful tender participation. In the case of IKOP Plusz, settlements with over 50,000 inhabitants require the development and existence of such a plan. The essence of SUMPs is to think in a longer term than a municipal political mandate. The professional advantage of SUMPs in terms of electromobility is that the decreasing of the pollutant emissions and air quality offsets of the operation counterbalance the higher initial costs and greater load on the electrical network of the electric vehicles and buses. It is also obvious that electric vehicles will not be able to completely replace diesel vehicles in bus transport. It will be possible to apply for the preparation of the SUMP from TOP Plusz, and at the same time, existing SUMPs can be updated in several ways.

László Mátyus, representing the Debrecen City of County Rank, confirmed the role and importance of SUMPs 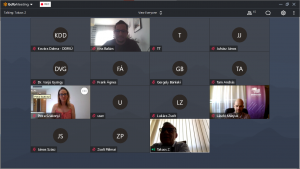 The RRF will only be a resource for electric buses of the solo type, but not for articulated buses and self-propelled trams.

Electromobility expert János Szász highlighted the great need for knowledge transfer, and also asked about the demarcation between individual sources. IKOP Plusz is based on the cost-benefit calculation, while the Green Bus Program and the RRF are based on predictable positive effects. He also emphasized that the development of battery technology is rapid and makes electric vehicles attractive. At the same time, this trend overwrites financing options and tools. 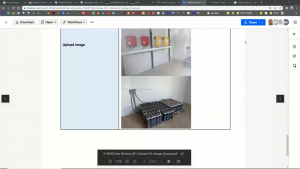 According to János Szász, the message of the Green Bus Program is sympathetic, even though the initiative was launched in 2019, so it happens that Hungarian cities test multi-year vehicles with relatively high mileage in 2022. He misses the fact that no specific data is provided regarding electric buses on their use in different weather and terrain conditions. It is therefore necessary to think very carefully about what conclusions we draw from the information related to testing. He also adds that, in addition to the daily operation of electric public transport, it is not possible to produce scientific work or publications from the extracted data.

Gergely Bánlaki highlighted that the Green Bus program has held 28 demonstrations since September 2020. Regarding the ebuses offered for testing, he noted that the manufacturers did not select them from their latest models, but older vehicles that had been in test operation for 4-5 years. The resulting deviations were taken into account by the Green Bus Program. However, a picture emerges of how to influence the views of city residents and city operators. The Green Bus Program worked with mobile chargers in the first 3 cases, but later with chargers with a capacity of 90-120 kW. Regardless, the charging time varied from settlement to settlement, also depending on the weather.

Based on János Szász’s opinion, the Green Bus Program would be truly demonstrative if it ran in 2-3 cities at the same time for 4-5 days. In this way, we could extract more concentrated, more usable results from it.

The E-MOB project is co-financed by the European Regional Development Fund and Hungary within the Interreg Europe Program.