On February 22, 2022, the PREGA conference series (https://www.prega.hu/), which dates back many years, held its first online professional program this year. The title of the event was the “Field and Agricultural Data Webinar” and the topics were:

The webinar was hosted by the Kaposvár Campus of the Hungarian University of Agricultural and Life Sciences (MATE).

The opening ceremony was held by Dr. Csaba Gyuricza, Rector of MATE. He stressed that the decade starting in 2020 started as a decade of digitalization in all areas of the national economy, including agriculture. The PREGA conference series could be the lobby for the transfer of state-of-the-art knowledge, in which MATE wants to play a central role. He also emphasized that the basic criterion for the competitiveness of the agricultural economy is the application of the most up-to-date knowledge and the constant monitoring of changes. The use of digitization, precision farming and the provision of data to ensure its operation is inevitable.

Dr. Zsolt Feldman, State Secretary for Agriculture of the Ministry of Agriculture, spoke primarily about the tender opportunities. He emphasized that the ministry had sought to expand the range of applicants, indicating that some 120,000 farmers did not understand or deal with digitization. Under such circumstances, the correct interpretation and handling of the data and the feedback of the information become more valuable. In view of all this, only HUF 88 billion of the HUF 212 billion support budget available for precision farming was applied for, mainly in connection with the purchase of machinery.

The webinar was followed by two roundtables with the Ministry of Agriculture and the leading domestic producers-developers and traders of precision farming (without the need for completeness: Axiál Kft., KITE Zrt., Tomelilla Kft., Valkon 2007 Kft., Agrovir Kft., Bayer Hungária Kft. etc.). In these forums, on the one hand, the conditions for the implementation of precision tenders and, on the other hand, the availability of the data needed for decision-making were discussed. 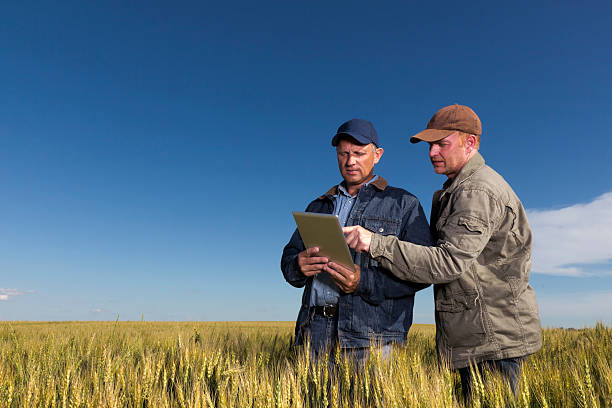 An image from the farming industry of two farmers using a tablet PC.

PREGA’s online webinars will continue in February 2022, you can read more about them here: https://www.prega.hu/webinariumok/.

Given that the South Transdanubia Regional Innovation Agency is also exchanging experiences in the Regions 4Food Interreg Europe project supporting the digitization of the agricultural economy and the food industry, we would like to recommend PREGA’s online events this month.