The South Transdanubian Regional Innovation Agency Nonprofit Ltd., as part of the implementation of the Regions 4Food Interreg Europe project, elaborates an action plan to impact the digitisation of the agriculture and food processing industry. As for the time being, the action plan is in its draft phase and contains four proposed actions. Taking into consideration the fact that the action plan is built on the proved to be successful good practices of the interregional project partners, this makes necessary that those, from whom we learn, have their observation and say/comments on the Hungarian draft action plan in a form of peer reviews. This process has started in August 2020 and continues in September.

On 2 September 2020 the professionals of the Pays de La Loire Region, France, assisted our work, especially by reviewing the fourth proposed action of the action plan called “The meeting of digital natives and traditions in rural areas”. Within this action the organisation of incentive programs for young career starters, bootcamp for high school and university students, and study trips, field exercises will take place. The objective is to attract and retain the Z generation – born after 1996, or as they are often referred to, the digital natives – in the countryside, the promotion of the rural way of life and agricultural production by disseminating digital technologies and innovative solutions. 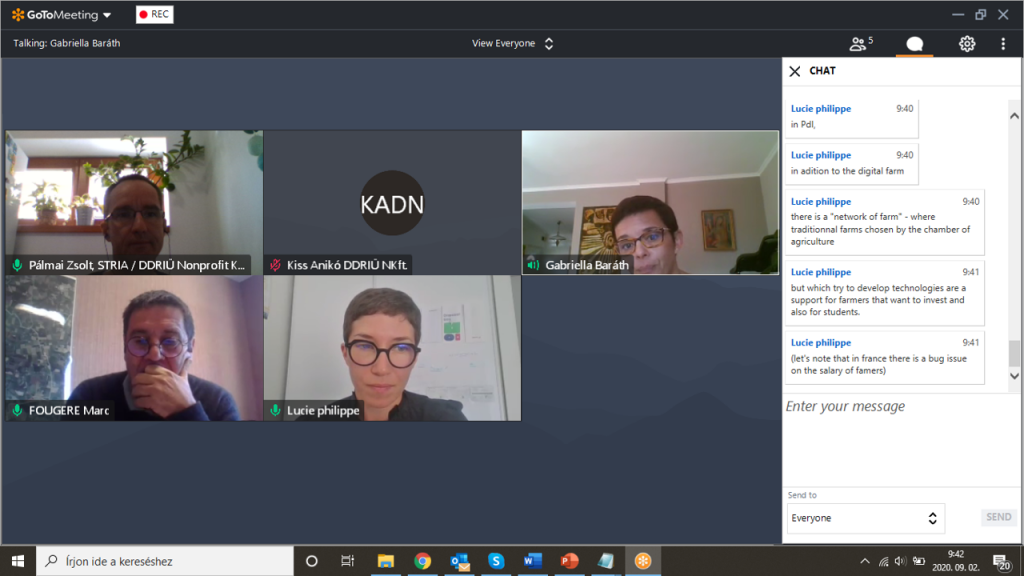 Participants of the French-Hungarian peer review

As regards the above action the French colleagues drove our attention to the proper mapping of the particularities of the Z generation, including their needs, along with making inventory of the advantages provided by digital farms. As regards the latter, the identification of already operating farms is due, or in case of their absence, the different incentives for piloting taking place among farmers. It is not merely the applied technology that counts, but the scope of agricultural crops, different ways of cultivation, species of farm animals, etc. also that the technology used/to be used is aimed at. The observation should also include the different sources of funding. All of these information and knowledge should be made available via the framework of organised training, as the digital natives in several cases know the technology until a certain extent, but are not aware of the advantages that the technological solutions offer for them in terms of rural life prospects and decent level of income provision. In other words, it is of huge importance to communicate that it is worth living in rural areas and that is also a real alternative in financial/income terms to the urban life.

The consultation with the Dutch colleagues of the Limburg Region, partner of the Regions 4Food project took place on 7 September 2020. During this appointment the third action of the draft action plan was in focus that is called “Supporting the agri-food sector by encouraging digital technologies”. The objective of this intervention is the learning, introducing and disseminating of the new technologies that will determine the future development of the agri-food sector. The due activities are organizing workshops, attitude-forming events, higher educational attitude formation, organizing webinars, online meetings and digital technology testing for stakeholders, besides the regular meetings, consultations. The proposed methodology is based on the understanding that the lack of financial background is not always a deterrent to encouraging the use of digital technologies. 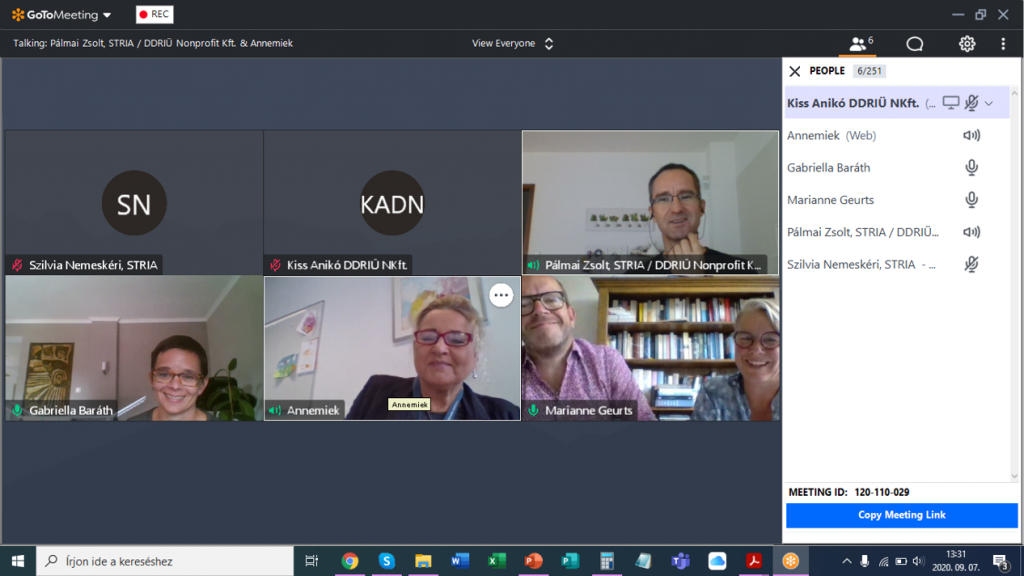 Discussion of Dutch and Hungarian colleagues

The professionals from the Netherlands in terms of the above written raised our attention to the importance of mentor programs that involve not only the representative of the farm/enterprise concerned in the planned digital investment, but the colleagues of knowledge bases also. The successful delivery of the action requires the mapping of the digital maturity levels of the farms/enterprises to be involved, and the communication of success stories also. These testimonies come from the local, geographical proximity area and are disseminated by using the channels of social media or by organising targeted events. As everywhere in the world, the information-communication solutions increase the attractiveness of agricultural professions. As a consequence of this, in the Netherlands special attention is paid to the spread of these technologies from the point of the future of the agricultural-food sector, and the same is advised to be done in Hungary. The role of cooperation also has high importance: in such a regard the participation in demonstration projects, and the role of farmer organisations were also highlighted by the Dutch professionals. Farmers introduce the novel technologies only in case their costs decrease and their performance indicators increase. Besides the written the colleagues from the Netherlands shared with us further, more general comments on the draft action plan.

The detailed description of the concrete good practices referenced from the two countries (Pays de La Loire Region: Technocampus Alimentation TCA, The digital farm; Province of Limburg: Yookr, Treemania) is available on the website of the Regions 4Food project, at the following link: https://www.interregeurope.eu/regions4food/good-practices/.